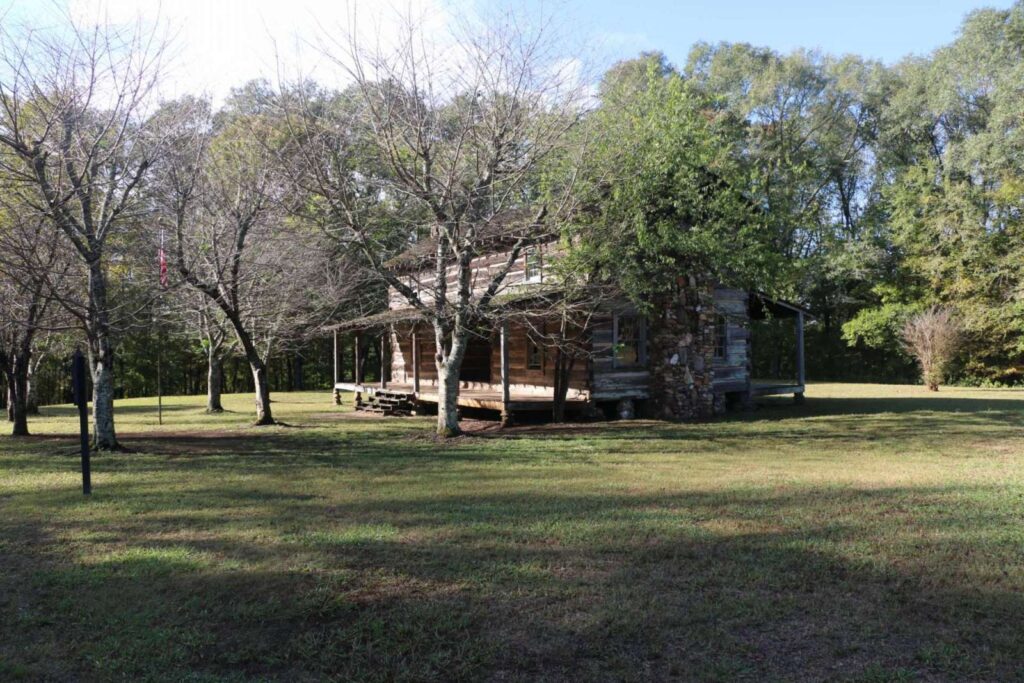 In October 2019, the Design Team met with the Friends of McIntosh Reserve at McIntosh Reserve Park, a 527-acre park along the Chattahoochee River in Carroll County, about 35 miles southwest of Atlanta. The site is named after Chief William McIntosh, Jr. (1778 – 1825) and contains the former site of Chief McIntosh’s plantation, “Lackchau Talofau,” (Acorn Bluff).

Chief William McIntosh was a controversial chief of the Lower Creeks in the early nineteenth century. Also known as Tustunnuggee Hutkee, he was born in 1778 in Coweta to a Creek mother, Senoya, and Scottish father, Captain William McIntosh of Savannah. Raised by his mother among the Creeks, he spent enough time in Savannah to become fluent in English and move comfortably between both Native American and white settler European societies. McIntosh generally supported the United States’ efforts to obtain cessions of Creek territory and efforts to “civilize” the Creeks and other native peoples. In opposition to traditional Creek ways, McIntosh owned two plantations and a number of enslaved people. One plantation, “Lackchau Talofau” (Acorn Bluff), is located in present-day Carroll County, and the second, Indian Springs, in present-day Butts County. These actions, in addition to McIntosh’s backing of the United States in the Creek War of 1813-1814, earned him contempt and distrust among most Creeks. However, his alliance with Native American agents to coordinate the distribution of food and supplies from the United States government to the Creeks after the war assured McIntosh’s continued influence among them.

In 1821, McIntosh negotiated the Treaty of Indian Springs, held at McIntosh’s plantation, during which he acted as the Creeks’ spokesman during negotiations over land distribution. However, McIntosh acted in his own interests and gave away large portions of the Creeks’ land to the state of Georgia. In return, McIntosh received 1,000 acres of land at Indian Springs and another 640 acres on the Ocmulgee River. Four years later, a group of mostly Lower Creeks led by McIntosh ceded the remaining Creek lands in present-day Georgia., the 1825 Treaty of Indian Springs, led to division amongst the Creeks and the eventual execution/assassination of McIntosh by the Upper Creeks, who opposed ceding the remaining Creek land to the United States government.

Thanks to the Friends of McIntosh Reserve, today visitors can read historical markers near Chief McIntosh’s marked grave and a historic house similar to one that stood at Acorn Bluff, enjoy trails, a splash water park, pavilions and sweeping frontage on the Chattahoochee River. The Park is a favorite of hikers and equestrian riders. Visit the Friends of McIntosh Reserve website here.