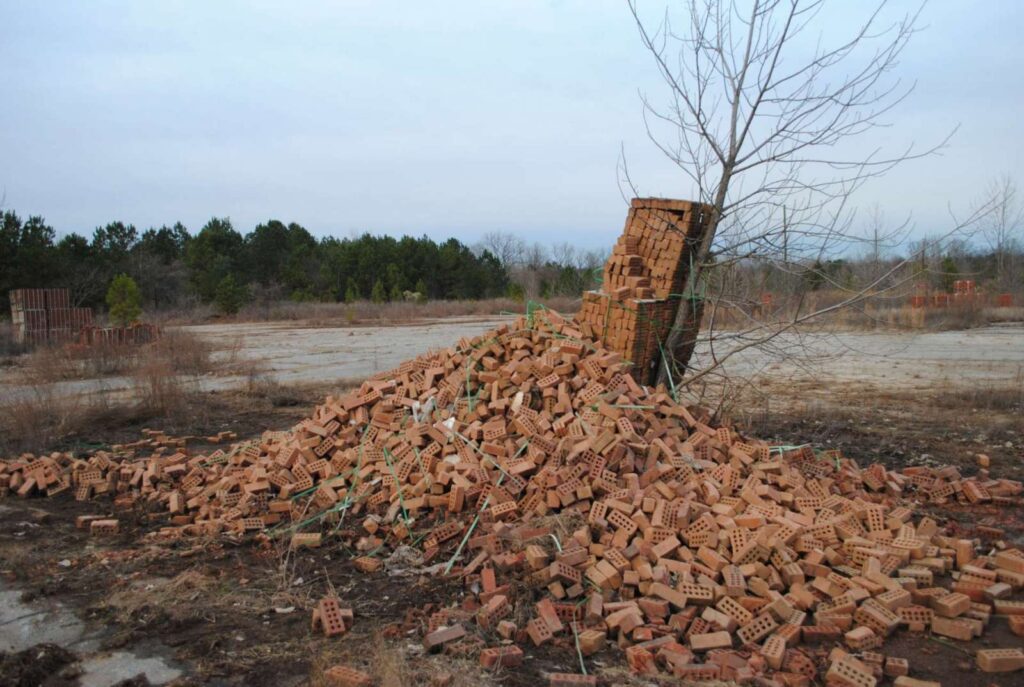 After visiting the Proctor Creek Greenway, Keith Sharp of Riverwalk Atlanta, led the group down to the abandoned site of the Chattahoochee Brick Company for a guided tour. The River is not visible from the site, but a short walk reveals where Proctor Creek tucks under I-285 on its way to the Chattahoochee River.  Keith pointed out the site’s strategic location on a map of the Proctor Creek Greenway where the tributary meets the Chattahoochee River. The Chattahoochee Brick Company, which operated on the site until recently, had a history of leasing convicts from local prisons, producing thousands of hand-made bricks a day under brutal work conditions with high mortality rates. The Company was purchased in 1878 by William Lowe and Captain James English who owned a conglomerate of construction businesses all built on convict labor. While serving as Mayor of Atlanta, Captain English mandated that all city streets be paved with brick, pushed for the development of the Atlanta industrial zone and built the neighborhoods of English Avenue and Vine City as workers’ housing. As police commissioner, he was able to control the source of labor at virtually no cost for enterprises like his own. Keith Sharp walked the group over to Avery Bate’s (1857 – 1887) grave marker placed by the family of Avery Bates after connecting with the author of Bricks and Bones, Richard Becherer. The future of the site is unclear, but residents of the area hope that the site can be a space to reflect and honor those that lost their lives on site.

This site visit was part of the 100-mile Windshield Driving Tour – a multi-day driving tour along the banks of the full 100-mile river corridor from December 10-14, 2018. The tour allowed the Design Team to ground truth GIS data with on-the-ground site explorations, photography and video documentation. The Design Team engaged with the community members and interviewed stakeholders on the river as face-to-face research that informs the project and forces an authentic identity for the Chattahoochee RiverLands Greenway. Download the full summary of the tour to learn more.