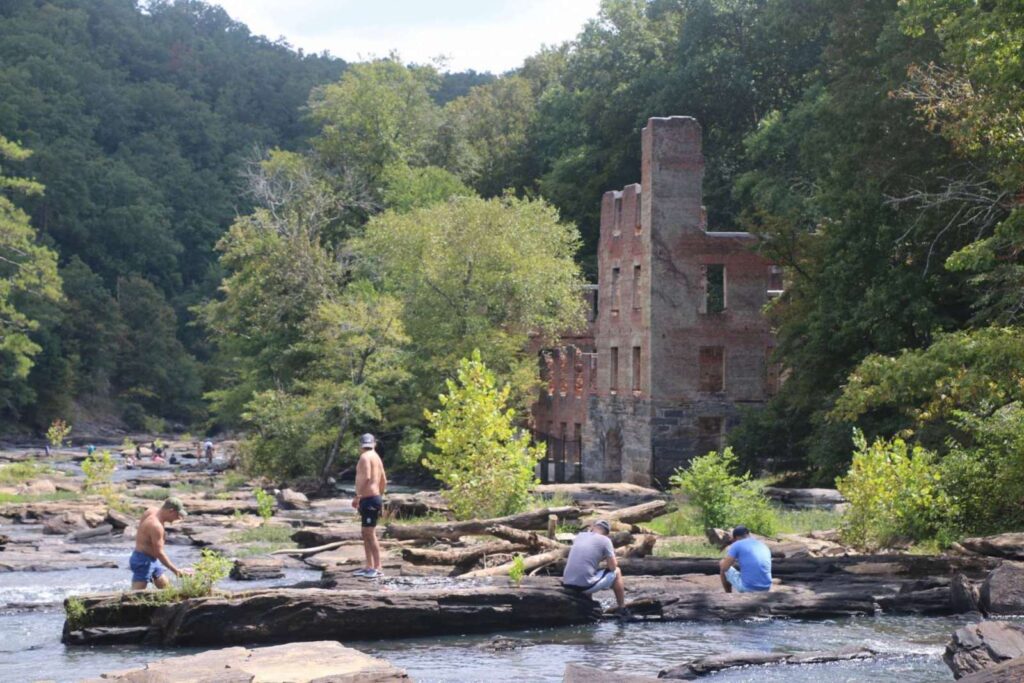 Located about a 30-minute drive and 15 miles as the crow flies outside Atlanta city limits, Sweetwater Creek State Park is a great place for an afternoon outdoors. Located in the Urban Core (Sub-Area 2) of the Chattahoochee RiverLands Greenway Study, the surrounding district contains fewer parks and fewer recreational destinations than the adjacent Sub-Areas. The park provides a welcome respite, with picnic and camping areas, boat launches, and more. Named for the Creek that flows southeast through the park and into the Chattahoochee River, it was created in 1972 – but has a long history.

The park includes a wooded trail leading to the ruins of the New Manchester Manufactory Company, a textile mill that burned down during the Civil War. The mill was built in 1849 and was originally called Sweetwater Mill, before the land changed ownership and the town became known as New Manchester. The mill was powered by Sweetwater Creek’s current, spinning cotton into yarn. Today, the interior of the site is only open to those touring the site with a guide, but anyone can explore the exterior and splash around in the Creek.

Atlanta has been one of the fastest growing areas in the United States over the past several decades. The population of the metro area, which spans 29 countries, increased from 2.2 million in 1980 to 5.3 million in 2010 – a 140% increase. The Sweetwater Creek watershed is located in Cobb, Douglas, and Paulding Counties in the western Metro Atlanta region. Twenty-three miles of the channel and its tributaries’ water quality meets government-set standards, making it a “supporting stream.”

How did Sweetwater Creek avoid widespread degradation of water quality during the recent regional explosion in growth? Recent research from Georgia State University examined trends in stream flow from 1986 to 2015 in eight watersheds within the Metro area, including Sweetwater Creek. The study found that Sweetwater Creek experienced the second-smallest amount of development among the studied watersheds by comparing changes in impervious surface over time.

Expanding access to this park is a clear example of the need to balance conservation and access in order to address both the Metro Atlanta area’s expanding population and the need to conserve water quality and habitat value that Sweetwater Creek State Park currently provides.