Other Aligning the RiverLands:

Back to Along the RiverLands 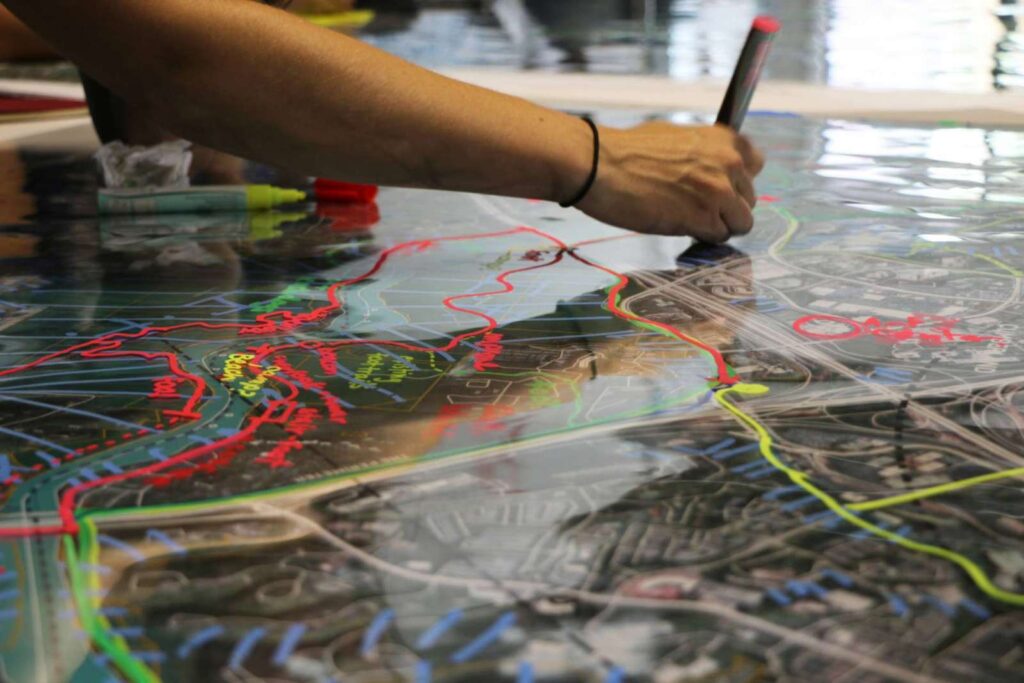 The preferred alignment is intended to reflect the broad array of feedback the Team has received during the last 10 months, while also speaking to the high-level vision for the Chattahoochee RiverLands. It is comprised of several alternative trail alignments that represent the collective input the RiverLands team received from various stakeholders. The current preferred alignment reflects what the team knows at this moment, but it is meant to evolve over time and intended to be adaptable. This alignment represents what is thought to be the most preferable path for a greenway trail, given various considerations related to land ownership, ecology, and existing planning initiatives; it is not always the most practical or the easiest to implement. The team recognizes that in some areas, this preferred option may not be readily implementable; therefore, the team has also identified both a practical, and in some cases, another alternative.

Other alternatives were developed with the understanding that in some cases there may be an option that is even more preferable to the preferred alignment, but which would be more complicated to implement. This often represents an aspirational option that the team determined is important to document for future consideration. These other alternatives can ultimately be thought of as longer-term options or even later phases of the RiverLands project.

In addition to the alternative alignments, the RiverLands includes tributary trails – trail segments that feed into or connect to the RiverLands alignments. These may, but do not necessarily follow tributaries of the river; they are often existing, planned, or in some cases, proposed trails or bike paths that provide connections between local destinations, regional trail facilities and the RiverLands to create a cohesive network or integrated system.

The Process of Reaching a Preferred Alignment

In August 2019, the Project Team (Design Team and Project Management Team) met at the Atlanta City Studio for the August Trail Alignment Workshop to draw the first draft of three alternative trail alignments over the entire 100-mile project area. Before drawing on each five-mile segment, the team consulted the supplemental data from the Existing Conditions Analysis, consulted Biohabitat’s Trail Suitability and Connectivity Analysis, and reviewed feedback from past engagement with stakeholders.

The team also held three Studio Hours sessions during this time at Atlanta City Studio. These Studio Hours were intended to allow the Project Team to take a step back from the mile-to-mile intricacies of the alignments and to think broadly about the RiverLands’ approaches to Equity, Ecology, and Health, Safety and Accessibility. These sessions were small focus groups composed of invited experts from various fields.

Based on input received over the course of the 10 months leading up to this point, the Team identified three theoretical alignments based on broad goals for the 100-mile RiverLands project. Each of these theoretical alternatives is guided by a different, major underlying assumption:

In the fall of 2019, the team solicited comments on the three different alternatives from the Chattahoochee Working Group (CWG), the three Sub-Area Committees, and members of the public during a Public Forum. Additionally, the Project Team hosted two In-Studio Preview during which Chattahoochee Working Group and Sub-Area Committee members were invited to mark up the in-progress alignment drawings.

To learn more about the feedback received at these meetings, please see the following blog posts:

The Design Team and Project Management Team met to process the comments from the SACs, CWG and Public Forum and review the goals for the preferred alignment. In addition to reconciling critical segments identified during the comment period, the team sought to fine-tune tributary trails, water access points, key destinations, and potential locations for trail-oriented amenities.