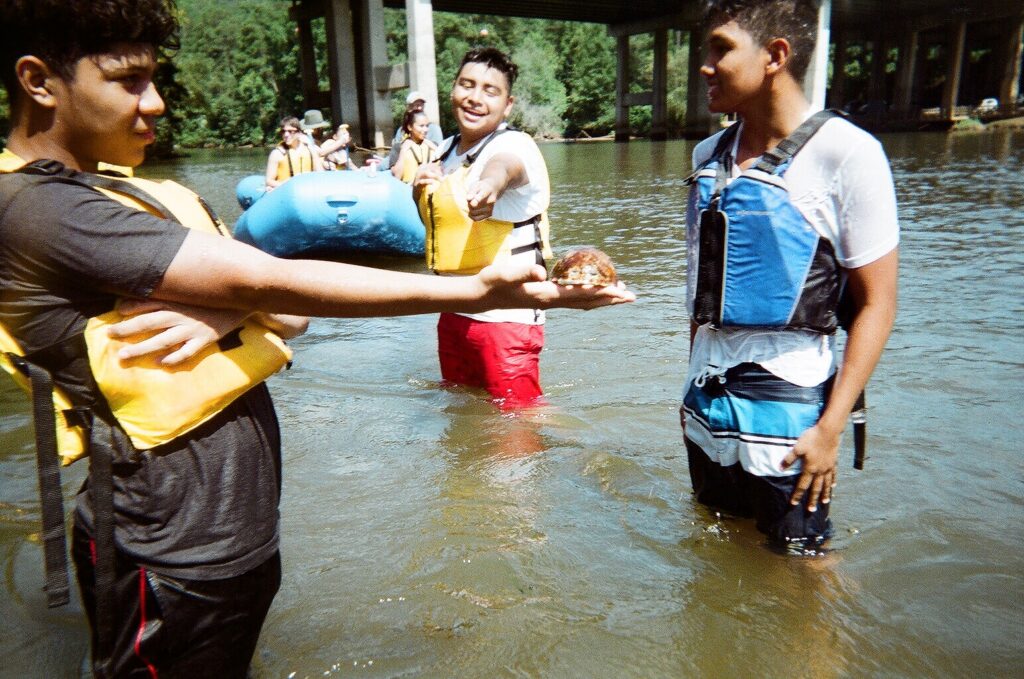 In August, a group of 15 students from the Agape Youth and Family Center joined the Design Team for the first of three River Rambles, rafting down the Chattahoochee River with the National Park Service. The River Rambles are an opportunity to immerse local groups in the river’s environment and history through fun, hands-on events. For this first ramble, the Design Team partnered with Atlanta’s Agape Youth and Family Center, an afterschool program within walking distance of the river in Northwest Atlanta. The students were enthusiastic to get out on the River, but most of the students had only been on the River once or twice before.

National Park Service Ranger Jerry Hightower gave a tour of Island Ford, one of the 15 units that comprise the Chattahoochee River National Recreation Area just north of Atlanta. Jerry worked with students to identify macro-invertebrates typically found in the ponds and creeks along the River (including a young musk turtle), encouraging students to think about their role in maintaining a healthy watershed. Jerry also pointed out native plant species like the Paw Paw growing along the creek’s edge – when you crush up the leaves, it smells like green bell pepper.

Dave Thomas, another Ranger with the National Park Service, then led the group on a rafting trip from the water access point at Island Ford down to Riverside Park in Roswell. He pointed out the shoals that created high ground for birds and fishermen alike. Though the River was 44 degrees that morning, most students hopped out by a sandbar to help clean up detritus and golf balls, sifting up other treasures from the river, including an old turtle shell. The float lasted about an hour and a half in total. The team coasted along some riffles, but mostly just relaxed and took in the cool breeze.

The students were given waterproof disposable cameras to document their rafting trip. See some of their photos here:

The River Ramble was bookended by discussions led by Dr. Na’Taki Osborne Jelks and Dr. Richard Milligan from the Design Team, tying the day’s activities back to the RiverLands study. Students shared their previous experiences along the River and favorite moments from throughout the day. All the students were eager to get back on the River before the summer’s end! Click here to learn more about the Project Vision.